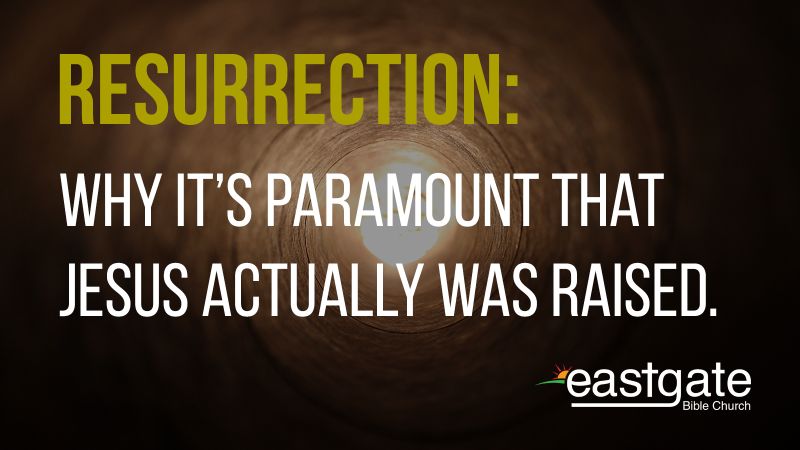 This is the second blog post in a series of articles examining the historicity and significance of the death and resurrection of Jesus. The first article specifically addressed the evidence for Jesus found in historical writings outside of the Bible. You can view that article at https://www.eastgatebiblechurch.com/blog/evidence-for-jesus-outside-the-bible/

1 Corinthians 15:14–19 (ESV)
14 And if Christ has not been raised, then our preaching is in vain and your faith is in vain. 15 We are even found to be misrepresenting God, because we testified about God that he raised Christ, whom he did not raise if it is true that the dead are not raised. 16 For if the dead are not raised, not even Christ has been raised. 17 And if Christ has not been raised, your faith is futile and you are still in your sins. 18 Then those also who have fallen asleep in Christ have perished. 19 If in Christ we have hope in this life only, we are of all people most to be pitied.

The apostle Paul who wrote these words knew exactly what was at stake if Jesus was not actually raised. Just look at the implications:


As you can see in the Bible's own admission, there is nothing minor about the implications for Christians if Jesus was not actually raised from the dead. Put simply, if Jesus was not raised, Christianity would be farcical and stupid, and all who hold such views should rightly be heralded as morons. However, the Apostle Paul who articulated these shocking implications if Jesus were not raised, committed his life, (not only his time but his actual life), to spread the news of Jesus' death and resurrection. He covered a massive geographical area and regularly received much hostility and violence because of his message. Why would he, (and most early Christians), willingly endure pain and suffering in order to spread the message that Jesus had been raised from the dead? Because he knew it was true and the implications were life-giving and had serious eternal implications for every single person.

Now we all know of people who have passionately devoted their lives to something that is unfounded and foolish. Just because someone believes something passionately, doesn't make it true. There is no doubting the undeniable facts of history that tell us that Paul and the early Christians passionately believed that Jesus had been raised from the dead. Remember the words that Roman historian Tacitus recorded in his Annals?


Cornelius Tacitus (1st Century Roman Historian) - Annals 15.44
Consequently, to get rid of the report, Nero fastened the guilt and inflicted the most exquisite tortures on a class hated for their abominations, called Christians by the populace. Christus, from whom the name had its origin, suffered the extreme penalty during the reign of Tiberius at the hands of one of our procurators, Pontius Pilatus, and a most mischievous superstition, thus checked for the moment, again broke out not only in Judaea, the first source of the evil, but even in Rome, where all things hideous and shameful from every part of the world find their centre and become popular. Accordingly, an arrest was first made of all who pleaded guilty; then, upon their information, an immense multitude was convicted, not so much of the crime of firing the city, as of hatred against mankind. Mockery of every sort was added to their deaths. Covered with the skins of beasts, they were torn by dogs and perished, or were nailed to crosses, or were doomed to the flames and burnt, to serve as a nightly illumination, when daylight had expired.

Tacitus tells us that Christians were torn apart by dogs, crucified and set on fire - sometimes their burning bodies being used for lighting at night. Nobody would endure such treatment for something they were not convinced to be true and important! Knowing that early Christians believed that Jesus was raised from the dead is one thing. The big questions are "Why would they (or anyone) believe that Jesus was actually raised from the dead?", "Is it actually true?" and "Why does it matter?" These questions will be addressed in following posts.